Art and Culture in Rajnandgaon

The City of Rajnandgaon is a pure bliss for tourists looking to explore the interiors of Chhattigarh. Once known as Nandgram it has seen rule of various dynasties including Marathas and Somvanshis. Since ancient times, the beautiful city of Rajnandgaon is woven in cultural and highly traditional fabric of Indian culture. With the passage of time, the city has seen the development but it upholds its age old traditions and spirit. The city celebrates almost every festival with great enthusiasm and fervor. Be it Diwali, Christmas, Eid, Gudiparv, the residents of the city shows a lot of involvement. 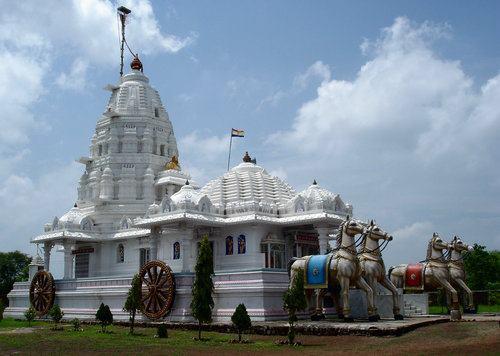 Rajnandgaon being an important part of the Indian history is dotted with several historic monuments that remind the glorious past of ancient and medieval India. Although the country has stepped in the 21st century, but the city of Rajnandgaon still maintains its unique identity. The majority of the population of the region is engaged in agriculture or government employment. Many residents are self sustained and run small family businesses. The local markets turnout to be a major attraction for the tourists who shops several artifacts and tribal crafts at reasonable rates. The residents in the city have highly rich and varied cultural beliefs.

The beautiful city is now home to several communities. One can found followers of Hinduism, Islam, Christians, Sikhs, Jains and Buddhism in the city. The city has several famous temples where pilgrims from various part of the country visit to offer their prayers.Few major temples in the city are Gayatri Mandir, Sitla Mandir, Daneshwari temple, Vireshwar Mahadev temple, ancient Shiva temple and Barfaani Ashram. Most of the ancient temples in the city are devoted to lord Shiva. Few other important pilgrim places are Devpura temple, Birkha Shiv mandir etc.

The main languages spoken in the city of Rajnandgaon is Hindi and Chhattisgarhi. However, the majority of the population is comfortable in speaking Hindi and has sound knowledge about the language. Apart from the Hindi speaking people, one can find several Marwari, Marathi and Chhattisgarhi speaking population. As majority understands Hindi, all the advertisements, banners and hoardings were published in Hindi. With the enhancement in life style and living standard, many educational institutions in the city have started imparting education on English language. Most of the travelers feel comfortable to communicate with the residents in Hindi. However, in the rural parts of the city one can find different dialects or distorted Hindi dialects but it is quite understandable.


Folk Dance and Songs of Rajnandgaon

Since ancient times, Folk dance and songs have been an important part of the culture in the city. The famous art and dance form represents the rich cultural heritage and traditional legacies of the city. The city has been famous for its unique performing arts and has been appreciated worldwide. Various dance and art forms of the region illustrates its unique traditional values. Chandaini- Gonda is one of the most famous dance forms in which the artist expresses their feeling through the medium of dance, dialogues and songs. The artists performing the Chandaini- Gonda boast colorful costumes and perform an act with great dedication. The acts were majorly based on the mythological characters that exhibit the great historic legacies. 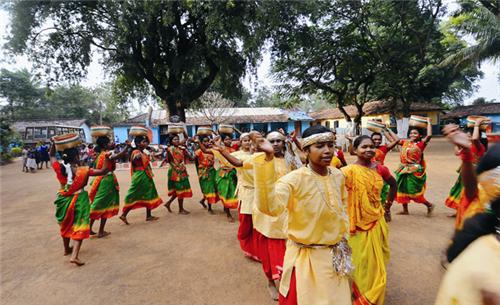 Another famous dance form is Sonha Bihan that depicts the glory of bygone days. The famous performing act is known to spell magic on the spectators. The act mesmerizes the audience with its colorful attire and proper infrastructural amenities of light and sound. Lorik- Chanda is yet another form of performing art that portray their artistic caliber and creative imagination which they have inherited from their fore fathers. Apart from these forms of performing art there are several other types of dances such as Kari, Hareli, Gammatiha, Rahas, Raut Nacha, Panthi dance, Soowa dance, etc. In these modern days, the popular Bollywood and western music has penetrated the city and has created a fan following but the ancient folk dances and art still holds their place in the hearts of the residents.

The city of Rajnandgaon celebrates all the major festivals of the country. Be it Holi, Diwali, Christmas and Eid, the residents celebrate the festivals with great fervor. The city is also known for hosting famous Mohara Mela at the bank of river Shivnath. Ahead of all the major festivals, the local markets and shops observes huge crowd of the customers. Many people celebrate the festive season with get together and family picnic at the local hotspots. During the festival seasons, fairs and fete are common in the region. The resident’s plans marriage functions during special occasions. Many shops offer discount shopping during the festive season to lure the customers. Youngsters in the city can be seen organizing party to celebrate the occasion is their way with fun, frolic and food.


Art and Craft in Rajnandgaon

Along with the festivals, the city of Rajnandgaon is famous for its art and painting. The art and painting of the region represent the dexterity of the artists. The city is well known nationally for its craft and tribal handicraft. The artifacts are quite popular among the urban society, and they love decorating their home with the tribal art and craft. Few specialties that the region offers are wood carvings, furniture work, bell metal handicraft, terracotta art work, tribal jewelry, clay painting and bamboo art. Kashta shilpa is quite popular in the region. Godna is another pioneering form of art practiced by the residents. It is mainly practiced by the women on their body parts. It is an ancient form of permanent tattoo inscribed on the body. 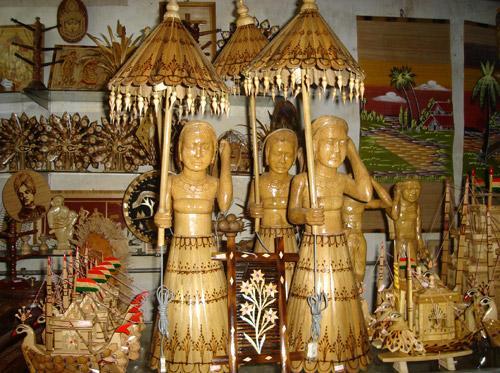 Bamboo is a major part of regional vegetation thus the artist uses the bamboo sticks to make attractive craft items. Some of the will known Bamboo produce include agricultural implements, fishing traps, hunting tools and baskets. Rural women in the region can been seen making floor and wall paintings daily. The most common form of floor painting is called Pithora painting and depicts the glory of god. These paintings are usually done on the occasion of marriages, childbirth and other occasions of fulfillment of wish, etc. Most of the paintings depict a horse that is considered to be sacred among the tribal population in the region.

The women in the city of Rajnandgaon can be seen wearing sarees. Mainly the native population likes adorning sari but many women whose ancestors migrated from other states likes wearing suit and ghagra. During any auspicious occasion or celebration, women prefer saris with matching blouse and jeweleries. With the increasing modernization, the young girls in the city love trying modern outfits. One can find several modern apparel stores in the city that offers western outfits at affordable rates.Men in the city usually likes wearing pants, kurta-pyjama and dhoti. The increasing urban penetration has influenced the clothing style of the residents but the city still loves its traditional roots. Young generation in the city can be seen experimenting with their dressing style.

The people in the city like eating rice and flour dishes in their meal. Along with rice, the resident’s likes eating green leafy vegetables like chowlai bhaaji, lal bhaaji, chech bhaji, kaanda bhaaji, kochai patta, kohda and bohar bhaji. The resident’s also likes relishing their taste buds with sweet dishes such as gulgula (bobra), bidiya, dhoodh fara, bafauli, kusli, balooshahi and khurmi. Bori Baasi is one of the most popular meals taken during the summer Season and is prepared using rice dipped in curd or butter milk. Bori Baasi is said to be good for digestion and keeps the stomach cool under scorching sun. Most of the people like eating Bori Baasi with pickle and onion. During the dry summer season, the dish keeps the body hydrated. The tribal population loves eating delicacy brew made of small, creamy white fruit of a local tree called Mahuwa.

Rajnandangaon is famous for literature especially in Hindi. It has been said that the Hindi language has been nourished and nurtured here. Presence of famous poets in this region enhanced the language in the past. It is said that Rajnandangaon has a great importance in the language of Hindi.