Rajnandgaon is one of the significant part of the Chhattisgarh State in India. Colored with tradition, culture and history, Rajnandgaon is emerging as a model city of the state as well as of India. Modern infrastructure and urbanization are rapidly making it to an important part. The city has also seen some special social development in recent years. However, the most significant impact that the city has witnessed in recent years is development sports and outdoor activities. As a part of developing and making a sports city of Chhattisgarh, Rajnandgaon has seen huge investments from administration. But it is not only about the improvement of infrastructure of sports but also about the keen interest and eagerness of the people that has made Rajnandgaon an emerging sports city. 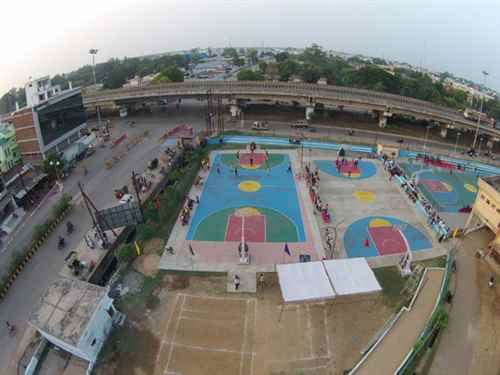 Almost all popular sports are played in Rajnandgaon. However, few remain favourites. From many years, it has been observed that people of Rajnandgaon have shown due interest in playing outdoor games. Both boys and girls are practicing for their passion for the game. Many of them went on to represent State and National levels as part of their journey. The infrastructure building of international standard has also facilitated the sports culture in the city.

Like most of other parts of India, Rajnandgaon has a similar story when it comes to cricket. The game that rules millions of heart is also very popular in the city. The Digvijay Stadium situated in Rajnandgaon is the official cricket stadium of the city and near by areas. The stadium is one of the ten largest stadiums in the entire country. Important domestic cricket tournaments like Ranjay Trophy, Duleep Trophy, Irani Trophy are played on the stadium. Rajnandgaon has produced many quality cricketers in the past. The Cricket Training Center associated with the stadium remains the makers of the brilliant cricketers from the city. Emerging Cricketers from the Rajnandgaon city have represented Chhattisgarh also in many tournaments. Apart from it, the city participates in various Cricket Club competition. There are few Cricket Clubs present in the city that nurtures and nourishes the talents of the upcoming futures. Rajnandgaon is regarded as one of the most important crickets hubs of Chhattisgarh. Authorities are also developing plans to further improve the Digvijay Stadium to make it one of the important stadiums in the country.

In a recent past, Hockey has lost its popularity in many parts of the country. However, Rajnandgaon is not one of them. Considering the popularity, the passion and love of the game, Government of Chhattisgarh recently developed an International Hockey Stadium in Rajnandgaon. The stadium was opened to the public in January, 2014 by Chief Minister Raman Singh, who also hails from the city. The International Stadium is an astroturf stadium and first International Stadium of Chhattisgarh. It has also generated great responses among the people and the already inclined people towards Hockey have found a new source of inspiration for the sport. The city has a great reputation when it comes to playing hockey. Many of the players from Rajnandgaon have represented the city, respected clubs and the state in many occasions. The popularity and the love for the sport in Rajnandgaon have again sparked the hope for the revival of the game that once dominated million hearts in the nation.

Rajnandgaon has one of the places that have shown grass root level of development in Football. Various small clubs are presently working with many emerging and passionate footballer. However, due to lack of organizational structure, professional football is still missing in the city like other parts of the country. But in recent years, Rajnandgaon has improved a lot in terms of professional football. It has also produced few of the professional players who went to play for the state. The home ground for football in Rajnandgaon is the Digvijay Stadium. National level trophies like Santosh Trophy, Subrata Cup and others are also played here.

Rajanandgaon is turning itself a sports city and all the games and the sports are emerging in the city. Basketball is one of the many sports that have found special place in Rajnandgaon. The basketball players of Rajnandgaon did not only participated in National Events but also in International events. There are players who have won many Gold, Silver and Bronze medals in National events. Also, they have represented the nation in many events like Under 19 Championship and others in International Platform.

Body Building has become a passion in the city after people from the city shown interest in it. Bodybuilders like AK Singh, Devendra Dewangan and Tameshwar Banjare have bought District Level, State Level, National level and even International level glory to Rajnandgaon city. It is often called as the City of Body Builders in Chhattisgarh.


Other Sports in Rajnandgaon

The other sports include many other games which are daily played at various part of the city. However, as far as the popularity and development of the games is not so shining, but it is too early to expect it from Rajnandgaon. The city has recently started developing, and the city is emerging very fast. The authorities expect that within the forthcoming decade, Rajnandgaon will have developed sports infrastructure for other games too. The sports that are slowly emerging in Rajnandgaon are Vollyball, Tennis, Boxing, Wrestling, and many others.

Sports Authority of India or SAI Training Center is one of the most important sport autonomous bodies in Rajnandgaon. This body does not only focus towards development and improvement of the sports but also provide adequate training and coaching to the emerging players so that they can shine in their career. Presently, SAI has the boarding facility as well which gives the sportsperson opportunity to excel and emerge in their career. This is the most important training center of Rajnandgaon. The SAI Training Center currently provides training for Vollyball, Basketball and Hockey. However, the authority is considering all the options to introduce more sports under its belt. Presently the organization is based in the Digvijay Singh Stadium.

This is also an autonomous body which controls the district level affairs in Rajnandgaon Cricket. It is responsible for training and coaching of local players. The association also organizes various tournaments that eventually turns into a State level or National level event. It has tasted good success in recent past and trying to expand its reach and promote many emerging players in Cricket.